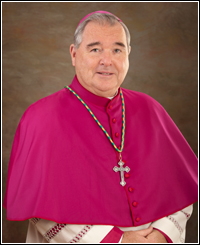 Archbishop Richard Joseph Gagnon was born on June 17, 1948 in Lethbridge, Alberta to parents Therese Demers Gagnon and George Gagnon. He came to British Columbia with his family while still a child and attended both Catholic and public schools. He graduated from Saint Thomas Aquinas Regional Secondary School in North Vancouver before proceeding to study philosophy, history and English at Simon Fraser University, completing his Teaching Certification for British Columbia in 1976.

Bishop Gagnon's Seminary Studies were taken at the Pontifical Beda College in Rome from 1978-1983. Richard Gagnon was ordained to the priesthood at Holy Rosary Cathedral on June 24, 1983, the Feast of St. John the Baptist, by Archbishop James Carney. The following month he became assistant pastor at St. Mary's Parish in Vancouver and also directed the Religious Studies program at Notre Dame Regional Secondary School until 1991.

Service To The Church

In 1984 he was appointed Assistant Pastor at Corpus Christi Parish, and two years later, Pastor of St. Jude's Parish in Vancouver. In 1987 he became the Chaplain of VANSPEC, which provides a religious education program for handicapped children. The following year he became a member of the Presbyteral Council of the Archdiocese of Vancouver. On January 1, 1986, Msgr. Gagnon was appointed Archdiocesan Spiritual Advisor of the Catholic Women's League, and served until 1992 when he was appointed to the Provincial Council of the Catholic Women's League. In 1992 he became Director of the Office of Religious Education, and the next year was appointed founding pastor of St. James Parish in Abbotsford and Dean of the Fraser Valley East Deanery. He became the Archbishop's representative to St. John Brebeuf Regional Secondary School in Abbotsford in 1995, and in 1999 he was appointed Administrator of the new St. Nicholas Parish in Langley.

Bishop Gagnon was appointed Vicar General for the Archdiocese of Vancouver in 2002 by Archbishop Adam Exner, OMI, after the departure of Msgr. David Monroe, who was appointed Bishop of Kamloops. He also sat on the Boards of the St. Joseph's Society and St. Mark's College and served on the Advisory Board for Redeemer Pacific College.

In February 2003, Pope John Paul II named Father Gagnon a Prelate of Honour, in recognition of his faithful service to the Church and exemplary performance of his duties. At his investiture ceremony Archbishop Exner recognized that Msgr. Gagnon had "rendered outstanding distinguished service in the Church inVancouver as a loving, effective, and dedicated pastor, a man who is ever ready to meet new challenges - a servant ready to go wherever called."

On May 14, 2004, Pope John Paul II appointed Richard Joseph Gagnon as the 16th Bishop of the Diocese of Victoria, Vancouver Island. Bishop Gagnon was formally Consecrated and Installed at St. Andrew's Cathedral, Victoria, on July 20, 2004. Bishop Richard Gagnon chose as the motto for his Coat of Arms, "To obey is to serve in love".