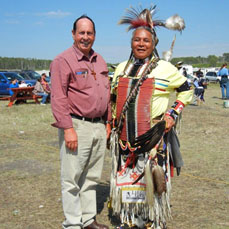 Deacon Conrad Plante (left), with traditional dancer and teacher Terry Pashe of the Dakota Tipi First Nation at the annual pow wow at Waywayseecappo in 2012.

The Archdiocese of Winnipeg's Westman First Nations Ministry was created in 2007 by Archbishop James Weisgerber with the belief that building a relationship with First Nations citizens should be a ministry unto itself.

Plante lives and works out of his hometown in St. Lazare, Man., in close proximity to Gambler, Birdtail and Waywayseecapo. He became a deacon in 1997 and has also served as parochial administrator at St. Jude's Church in Erickson and at Sacred Heart Church in Elphinstone which is served from St. Jude's.

The basis of his ministry, which is supported by the archdiocesan Sharing God's Gifts annual appeal, is simply "to be there."

"It is to minister to the needs and concerns of First Nations people in the Westman region and to build trust and respect between us. Their faith is very close to the earth, to the sun and the stars," says Plante. "My own faith has deepened because of these relationships."

Plante's presence has blossomed into an active ministry of performing baptisms, weddings and funerals and visiting the sick and dying in hospitals and in their homes.

Plante praises the importance of the work of the Oblates of Mary Immaculate who began ministering to the spiritual needs of aboriginals and early settlers in the area in the late 1800s.

Plante strongly encourages all Catholics to participate in future Returning to Spirit opportunities.