Winnipeg's population rose dramatically due to immigration in the 1890s. Up to that time, most Catholics were French-speaking or aboriginal and most clergy were from Quebec or France. Now tensions resulted as the number of Catholics of Irish and Eastern European backgrounds grew.

A letter published in the Northwest Review on April 10, 1895, said, "In Winnipeg, the largest melting pot in the Canadian West, the difficulties over religion and nationality came to a head."

Langevin did provide for non French-speaking Catholics. By the end of 1906, there were six churches in Winnipeg. They were St. Mary's and Immaculate Conception (English), Holy Ghost (Polish), St. Joseph (German), St. Nicholas (Ruthenian) and Sacré Coeur (French).

The Irish, however, believed that more needed to be done. In December 1906, they presented a petition to Langevin. It contained three main requests.

The first request was to create new English-speaking parishes with diocesan priests. Four of the existing Winnipeg parishes were served by French Oblate priests, and the Irish argued that it was not enough to have priests who could speak English. They felt the need for English or Irish priests who would better understand their ways.

The second request was for an English-speaking Catholic college, comparable to St. Boniface College, for the higher education of their sons.

The final request was for an English-speaking bishop. The petitioners argued "that owing to the vast territory included within the Archdiocese of St. Boniface and the large increase in population ...that the time is opportune for the...establishment of a Diocese to be presided over by a Suffragan Bishop with his See fixed in Winnipeg and thereby lighten the labours of the Archbishop." [see pp. 13-20 of Reid thesis and pp. 8 and 9 of Wikeem] (see bibliography)

Langevin was favourable to the first two requests. He told the petitioners that he had been acquiring land to form two new parishes. He also agreed that an English college was a good idea, saying however, "We must have the means, men, money. We have not these now...I don't think the time has come just now." [Wikeem quote p. 10] (see bibliography)

He was completely opposed to the final request. "...to have a Bishop in Winnipeg simply means that I should be replaced by an English-speaking Bishop. I will never consider the matter." [Wikeem quote p. 11] (see bibliography)

When promised new parishes were not created within the next year, the Irish appealed to the Apostolic Delegate Monsignor Sbarratti. Langevin and Sbarratti then exchanged a series of letters. Langevin wrote in August 1907 that he would erect the new parishes "when men and means were available." Finally, early in 1908, Sbarratti warned "that it was necessary, in spite of all difficulties, to erect the two promised parishes as quickly as possible." 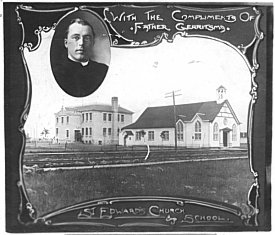 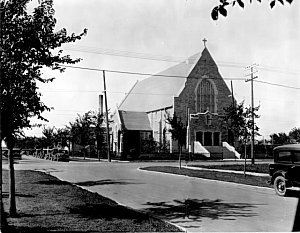 Shortly before Langevin's death in June 1915, two petitions were addressed to Pope Benedict XV outlining the case for a separate English diocese for Winnipeg. These petitions requested: "That in the selection of the future Archbishop of St. Boniface, a prelate...preferably one whose native tongue is English be chosen.... That if it be found impossible to grant our prayer in this respect, then that the diocese be divided, and an English-speaking suffragan bishop... be appointed to take charge of that portion of the diocese including the cities of Winnipeg and Brandon and all the portion lying West of the Red River and north of the Assiniboine River." [quoted by Wikeem p. 14] (see bibliography)