Welcome to our News Page! Here you will find news stories from the Archdiocese of Winnipeg, the Church in Canada, and beyond! We also invite you to submit your own articles to our Communication Services Office. Selected articles may be included here, as well as our Weekly News Bulletin sent to all parishes in the Archdiocese. Questions and submissions may be sent to:

Note: Click on the small arrow beside each news heading to expand to the entire article. 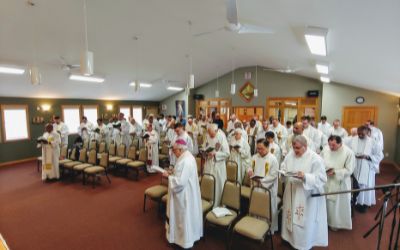 Archdiocese of Winnipeg - Personnel appointments have been announced for the upcoming year. Please read more from the memo linked here. 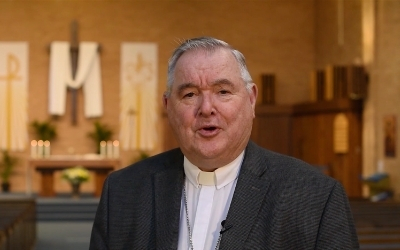 Archdiocese of Winnipeg - In this week’s edition of the Friday Report, Archbishop Gagnon reflects on various topics relating to events of the week. He briefly updates us on the importance of advocating for those who see MAiD as their only option and support for palliative care and exceptional health care.

The Archbishop then updates us on the exciting papal visit announcement released yesterday morning, including details about where the Pope will go during his time in Edmonton, Quebec City and Iqaluit. He also gives us a positive update on the Archdiocese of Winnipeg’s Solidarity Fund for Truth and Reconciliation. The first contribution from that fund has been donated to the Assiniboia Residential School Legacy Group towards the commemorative marker they are installing on the grounds of the Assiniboia Residential School.
Lastly, His Grace informs us about the World Meeting of Families that is currently taking place in Rome. We have two couples as delegates: John and Cheryl Acosta from Winnipeg and Chantal and Rick Debin from Shoal Lake. We’re also happy to share some video highlights they have sent us of their recent trip.
As always, thank you for following along with the Friday Report and for sending in your questions! Have a blessed weekend.
Resources:

Contribute to the Solidarity Fund and Sharing God’s Gifts by downloading the Archdiocesan App on iOSApple or Android.

The Church in Canada Section 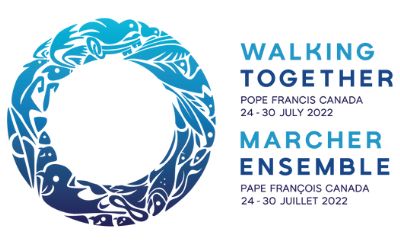 Winnipeg, Manitoba - Indigenous artist Shaun Vincent designed the official logo for the upcoming Papal Visit. The theme for this visit, as we know, is Walking Together. This theme reflects the Catholic Church's responsibility to take meaningful steps to journey with Indigenous People through the ongoing path to true healing and reconciliation.

Ottawa - The Vatican has released additional details regarding the Papal Visit to Canada, July 24-29, 2022. The Pope’s visit will provide an opportunity for him to listen and dialogue with Indigenous Peoples, express his heartfelt closeness and address the impact of residential schools in Canada. The papal visit will also provide an opportunity for the shepherd of the world’s 1.2 billion Catholics to connect with the Catholic community in Canada.

The Holy Father will travel within Alberta (based in Edmonton) from July 24-27, followed by a visit to Quebec City and Ste. Anne-de-Beaupré, July 27-29. Pope Francis will visit Iqaluit, Nunavut the afternoon of July 29 before returning to Rome.

Drawing on the theme, “Walking Together”, the Holy Father’s journey of reconciliation, healing and hope includes visits to a former residential school, Indigenous pilgrimage sites, two public Masses and a mix of private and public events. There will be tickets available (free) for a limited number of events, all of which will be broadcast and accessible via live stream.

For ticket information, to volunteer, donate or learn more, visit www.papalvisit.ca (English) or www.visitepapale.ca (French). Please continue to pray for the health of Pope Francis and for all those engaged in the ongoing healing and reconciliation journey.

Creating hope for the future with Development and Peace
Jun 14, 2022

The Church in Canada - Development and Peace ― Caritas Canada is pleased to announce that its Orientation Assembly is being held in person from June 16 to 19, 2022 in Halifax, N.S.

The Orientation Assembly is a collaborative forum for reflection on our organization’s direction and programmatic themes for the next five years. The theme for the upcoming assembly, Create Hope, is inspired by the message of Pope Francis to the Fourth World Meeting of Popular Movements in October 2021.

The 150 participants expected at the assembly include Development and Peace members from dioceses from every province and territory across Canada; the national council and national members; youth representatives; staff; Catholic bishops; Church leaders; and representatives from international partner organizations and sister groups including the Catholic Women’s League, KAIROS and Caritas Internationalis.

Development and Peace’s president Brenda Arakaza said, “The entire Development and Peace community is coming together to reflect, to ‘read the signs of the times’ and to chart our course for the future. I am honoured that so many people―from the Vatican, from countries of the Global South and from every corner of Canada―will be shaping and sharing our journey. The collective wisdom of the Orientation Assembly will ensure that our organization remains a strong, vibrant and effective builder of a world of justice and peace.”

Danny Gillis, chair of the Orientation Assembly planning committee, said of the preparatory consultations, “While there are many issues Development and Peace needs to address, one thing is certain: this movement is passionate about ensuring the centrality of the voice of the poor.”

Andrea Grace Dsouza, a young adult delegate from Manitoba, revealed, “I got involved in D&P because I saw it as an opportunity to learn about Catholic Social Teaching and my responsibilities toward caring for our common home.”
A partner reflected during a sharing circle, “Listening becomes a way of life that leads us to a culture, the way we make decisions, to transform our minds, our communities, to listen to the poor, to the people.”

Highlights of the Orientation Assembly include the following presentations:

Cardinal Czerny’s keynote address and select other presentations will be streamed live. The Orientation Assembly will also be covered on Development and Peace’s Twitter (@DevPeace), Facebook and Instagram feeds (@devpeace). Another press release will be issued after the assembly.

There will be 6 delegates representing Manitoba in Halifax.

In the Community Section

Winnipeg, Man. - St. Paul’s College and our Foundation are pleased to share with you the UM Today article announcing the creation of the Dr. Moti Gharib Shojania Environmental Award.

The award will be given annually to a St. Paul’s College graduate student or alumni member (holding either a Ph.D. or Master’s degree) who is currently working towards, advocating for, or conducting research focused on the restoration and protection of the global environment. The value of the annual Award is $10,000. The award will continue as long as the Fund is available.

The Award is supported by a $100,000 fund that was established by Moti’s family to honour her legacy with the College. A former English professor at the University of Manitoba, Moti served as the Dean of Studies at St. Paul’s College from 2012 until 2017. The Award will continue as long as the Fund is available. Should you wish to contribute to this Fund, please contact the Community Development Office at 204-474-9098 or 204-474-9148 to learn how or visit St. Paul’s College Foundation Inc. at CanadHelps.org. 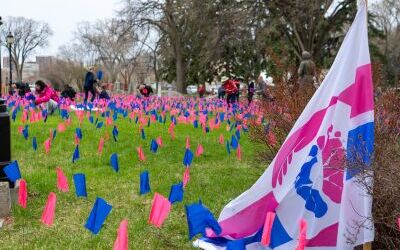 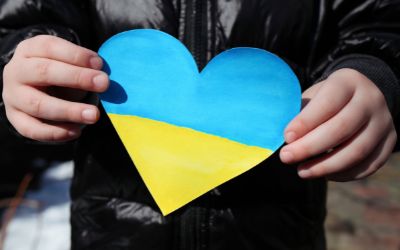 Ukrainian Catholic Archeparchy of Winnipeg - As more and more refugees arrive in Winnipeg from war-torn Ukraine, the local Manitoba Branch of the Ukrainian Canadian Congress needs more volunteers. They are asking for more people to come forward and help the newcomers settle in and "learn the ropes" and be a friend or contact to help explain and guide them through the challenging nuances of life in a new land.

Ukrainian-speaking volunteers who can act as "language assistants" to those coming to the UCC-MPC Reception Hub at the Best Western Airport Hotel (Wellington Ave) to help provide a warm welcome to newcomers. The Reception Hub is open 6 days per week (Monday-Saturday) and hours vary day to day and go into the evening on some days.

Please fill out this short survey (Click Here) to indicate your interest. Once your information is received, orientation information will be sent to you along with the signup link. 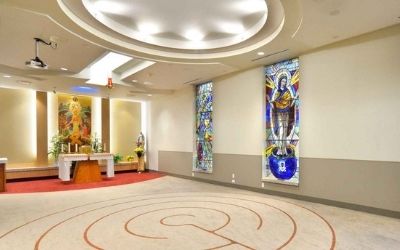 In The Community - Due to the pandemic, the Holy Family Home Auxiliary is hosting a 50/50 draw instead of their annual "Ladies Night Out Dinner'. This 50/50 draw will help make up for the lost fundraising revenue of the last several years. Proceeds from this fundraiser will be dedicated to supporting resident programs and the purchase of specialized equipment and furnishings.

To buy your tickets, please visit www.fundingchange.ca/holy-family-home-auxiliary or at the Lubov SSMI Foundation at 1085 Main Street, Winnipeg, MB. 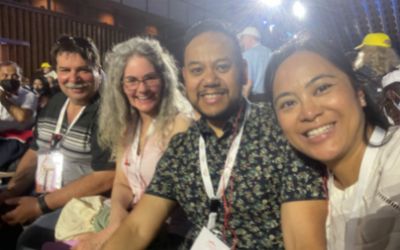 Participate in the World Meeting of Families
Jun 24, 2022

Rome, Italy - As the World Meeting of Families continues now until Sunday, you can keep up on the action through their social media pages!

Watch the live-stream link for the World Meeting of Families for all the sessions and happenings from today to Sunday, here: https://www.youtube.com/c/diocesidiromaofficial
Find more info about the WMOF on their website: https://www.romefamily2022.com/en/
Everyone can also follow their Instagram page for updates as well: https://www.instagram.com/wmof2022/

A plea from Peru to the Canadian mining industry
Jun 9, 2022

The Universal Church - The Comisión Episcopal de Acción Social (Episcopal Commission for Social Action, CEAS) has written an open letter to delegates at the 2022 Convention of the Prospectors and Developers Association of Canada (PDAC), which will be held in Toronto from June 13 to 16.

CEAS, a long-time partner of Development and Peace ― Caritas Canada, is the official organization of the Peruvian Episcopal Conference that works for the defense and promotion of human rights in the light of the Gospel and the social doctrine of the Catholic Church.

In the open letter, Bishop Jorge Izaguirre Rafael, president of CEAS, notes that the Peruvian mining sector, in which Canadian companies play a major role, “has not brought the promised improvement in quality of life for most communities in the mining areas.” He also calls on the PDAC to support Bill C-262, “which would require Canadian companies to conduct human rights and environmental due diligence before beginning operations in another country.”